Kukri booklet; anything/everything about the knife 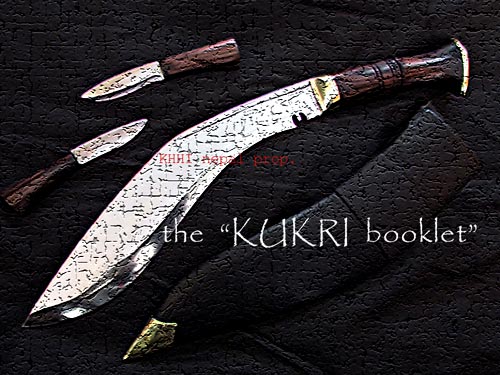 I have prepared this special document on the “Khukuri” for the general public knowledge. There are several questions and queries, anything and everything about this amazing knife one may have that I have tried to address. I do hope you would find this presentation useful and benefits you in some way to know more about the kukri. If there is anything missing, something not clear/right or any suggestion then please feel free to email me at saroj@thekhukurihouse.com

What are the parts in a khukuri?
Khukuri has mainly 3 different parts, the blade, handle and the scabbard(dap). The blade and comes attached as 'kukri' and scabbard is the cover of the kukri. In traditional peices 2 small supporting knives comes as well in the sheath. You can increase your 'kukri knowledge' by learing about the parts and terms of kukri knife in detail.

What are the types of kukri?
How many types of kukri are there?
There are many types of kukri having various shapes and sizes. Makers adapt/ed various profiles to individualize and express their making and to also get the best result out of the knife. Primarily the kukri can be divided into the following main categories >>
BLADE
Sanglo (Slender): narrow and pointed blade profile like Sirupate and Chitlange etc.
Budhune: fat and robust body kukris like Bhojpure and Chirrawala.
Majaula (Medium version):  Blade profile in between the above like the modern army service kukris that are well balanced in weight and size.
Kupre: Highly curved kukri with a pointed peak (shoulder) or no peak at all like the Salyani and some historic kukris.
Know more about types of kukri based on blade profile with examples >>
HANDLE
Parowal: Rat Tail Tang or Stick Tail tang also known as the “Hidden Tang” like most of the old models and army versions have.
Panawal: Full Flat Tang Riveted version in which the tang follows the profile of the handle and pins are used to fix the scales.
Pravabwal:  Shape/feature other than basic khukuri. A break from traditional that is highly influenced from other knives, styles and communities.
SHEATH
Sadha: Normal plain leather sheath with frog or no frog at all.
Jhilke/Sajaune (Fancy): Decorative sheath with craftsmanship and adornment for display and gift.
Kothimoda: Silver sheath khukuri for special occasion and people.
FEATURE
Angkhola: The Panel of the blade is hollow grounded (area between spine and bevel) to reduce weight and tension.
Chirrawala: Fuller/s is created in the panel for strength, balance and beauty. First fuller is forged and then grinded out from the surface.
Buttewal: Various patterns, designs and lines are made to give an artistic look and value to the kukri.
Pattiwal: Taller and unparallel bevel is made to enhance cutting ability and look of the blade.
Sadha: Simple profile with even surface like the Army models.
(In today’s context we must also add one more category called the “Naya and Naulo” or “New and Strange” since these days kukri is heavily modified and modernized to one’s taste, benefit and demand)
Share