The Khukuri has fascinated me for quite some time. Myself coming from a Japanese Sword background, I’ve often looked at different cultures and blades that are native to such cultures. Most (The Japanese Katana, the Chinese Jian & Dao, etc.) serve only a wartime or ceremonial purpose, and are not adapted for everyday use. Further yet most require much time and training to become proficient with. In an everyday sense, this is not practical.

The Nepalese Khukuri caught my attention both for its design, but also its utility. Commonly used as a tool and a weapon it has seen use in the homes and fields of Nepal and in battlefields around the world. Training makes anyone more proficient with a tool/weapon, however, to be able to use a Khukuri with enough proficiency to get day to day tasks done and for wilderness survival the Khukuri is quick and intuitive to learn to use. This makes it super practical.

The Khukuri I chose is the Aitihasik Khukuri from KHHI Nepal. My selection was based on both its utility and historical value. A design of knife that was prevalent in an age when a warrior had to rely on that knife for combat and survival. This particular blade is modelled after the type of Khukuri used against the British, and the type of blade used as one of the only nations to ever beat the British Empire to such an extent that they eventually decided to form a partnership with the Gorkhali (Known nowadays as the Gurkha).

The Gurkha’s even have their own British Regiment and have since worked closely with the British army throughout both World Wars carrying forward into the modern day.

encounter with a flawless orthodox knife; a dream knife indeed 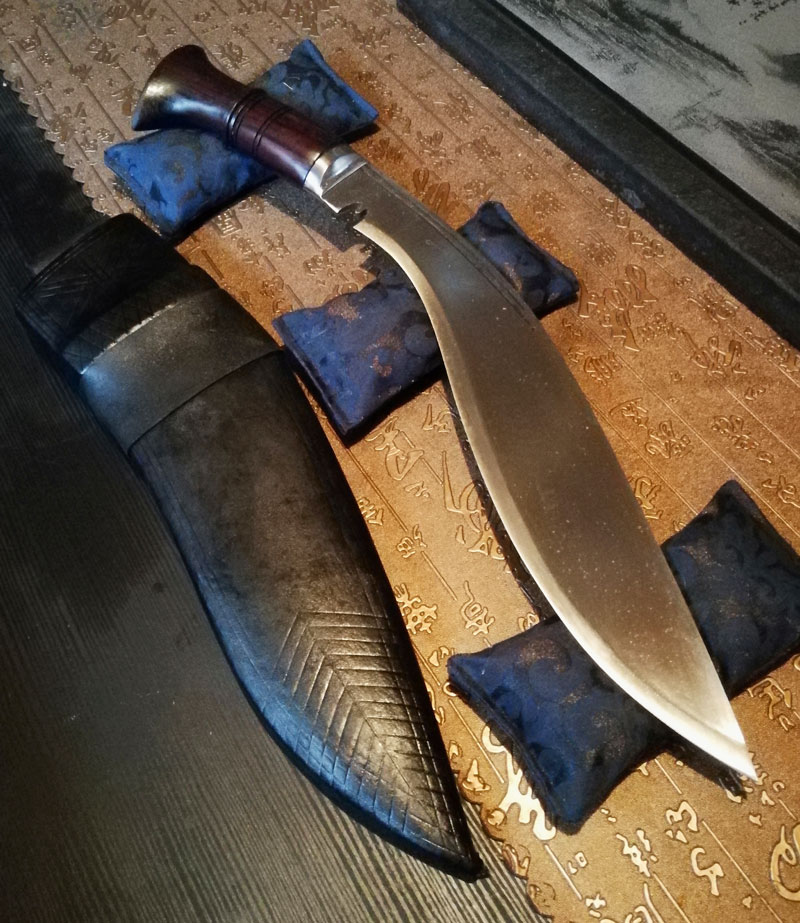 Although advertised as unpolished, the polish it does have is both robust and practical. With beauty in its simplicity. The hardwood grip is made very well and is nice and tight. Its design helps lock one’s hand into the grip to ensure that it does not slip anywhere with use. The scabbard is made from wooden planks wrapped in buffalo leather; the fit is super tight. Initially it was difficult to draw and sheath the blade but after a few times putting it in and out the fit improved.

The edge comes super sharp, enough to cut paper while also being sharp enough to bite into a target. The edge is Differentially hardened, (hard edge, softer spine). This is seen on many blades throughout Asia but is most notably used to make the famous Japanese Sword. The process the Khukuri uses to make this differs a little bit, however. While the Japanese will use a special clay coating to influence the rate the steel cools (Quicker cooling near the edge, while slower cooling near the spine) as it is quenched in a tub of water (Many blade smiths use oil in place of water nowadays). The method used on the Khukuri is done by taking a kettle of water and carefully pouring it on the edge of the blade. This achieves a similar effect as the edge is able to cool quicker thus giving it its harder edge, and the spine cools slower. This makes it softer than the edge and aids in the blades ability to absorb shock therefore increasing its overall durability.

For a blade that is designed to cut as its primary purpose, it is obvious such a blade would have a more forward center of balance. With this said this Khukuri is a dream to handle and is quick and easy to maneuver. Even after one’s initial cut one does not need to worry about overextending (in a combat sense) as it is super quick to follow-up with another precise cut while not leaving one open for a counter cut.

It has enough of a point to the blade that while not designed to be a thrusting tool, it can thrust quite well, and during tests was able to go through light clothes just fine. (Jeans, and Polyester/Cotton T-shirt)

Cutting however is where this blade excels.

In the Japanese Sword Arts, cutting Tatami (Rice Straw Mats) is the modern standard target used to test one’s blade and one’s own skill level with the blade. In old times the Japanese used to use prisoners to test their blades. Obviously, we don’t do this nowadays and Tatami is used as a substitute. It is said that Tatami that is rolled and soaked in water can replicate the density of human flesh, thus it is used even to this day. Because of this it has become the standard for testing the cutting ability of knives and swords around the world.

The Aitihasik Khukuri has no problems going through a single rolled Tatami Mat. I was so surprised at the lack of resistance the Mat provided that I decided to roll 3 mats together to attempt the cut.

The Khukuri was able to cleanly cut through 3 mats quite well except for a tiny snag at the end that it ripped through. If one mat is about equivalent to a human arm, 3 mats is about equivalent to a human leg. For a 13” Blade length this is quite incredible. To give a little bit of perspective the diameter of 1 rolled tatami matt is approximately 4-5”, 3 rolled tatami mats is around 12-15” in Diameter. (Depending on how tightly they are rolled)

There are Japanese sword practitioners that would have difficulty attempting this cut, while still having the advantage of a blade length more than double (26 – 32”) of what this Khukuri is, as well as the advantage and power of 2 hands. For a single-handed blade of only 13” to be able to inflict that much damage to a target. This is extremely impressive.

It is no wonder that even the Japanese during World War 2 feared a Nepalese soldier armed with a Khukuri above many others.

knife for a lifetime...

Because of its size this Khukuri is also easy to carry through trees and brush, and its weight is negligible during a long hike. Something that makes it a super effective and practical tool for wilderness, camping, or survival. 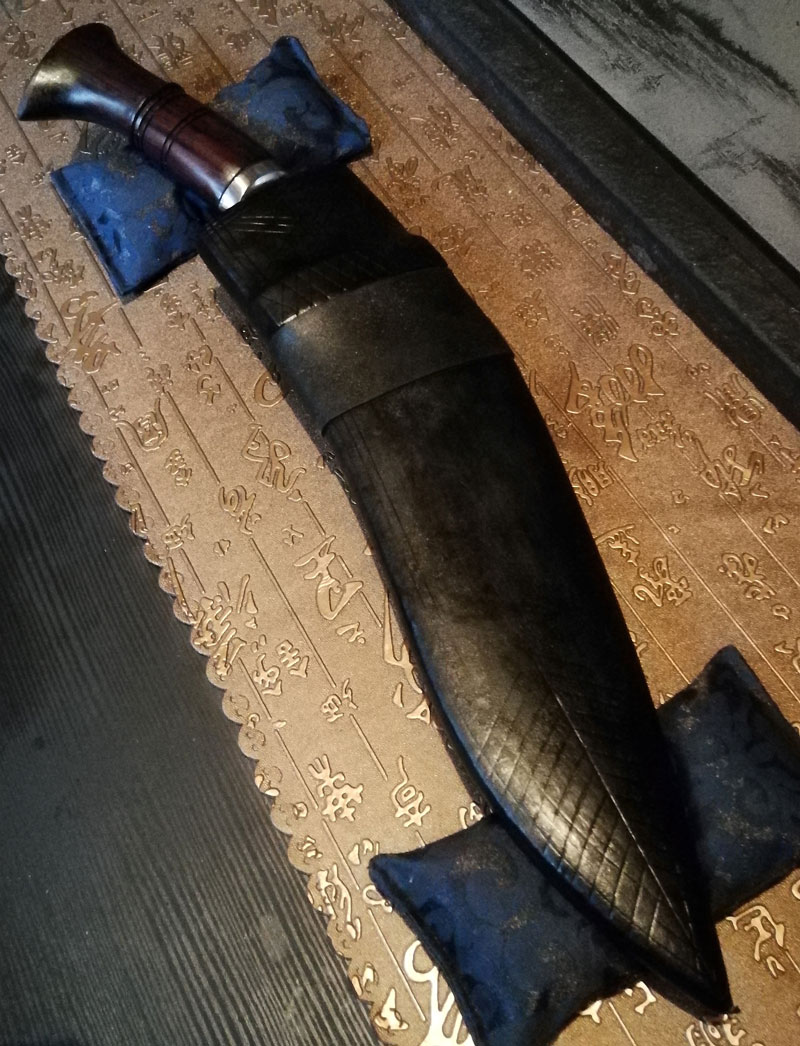 Each part of the Khukuri is optimized for specific tasks, the tip of the blade is useful for skinning or removing meat from bone, as well as finer work that only a sharp point can do. The belly of the blade is great for use as a hatchet and delivers a cleaving blow to any target that one needs to split apart. The inside curve is amazing for stripping bark off a tree and performing tasks almost equivalent to a draw knife.

It is peened at the base of the handle, and while I wonder how well the peen will hold up over time. This is no different than many Asian and Europeans swords of old. Those types of swords held up fine over much harder use, and thus I don’t see any issues that would arise in the strength of the peen in the foreseeable future. Many Antique Khukuri were not peened and had a partial tang glued into the handle. While in western eyes many do not like this and find it weak. It has served quite well in Nepal’s history, and is quite durable if it is firmly fit in place and the handle is well constructed. This Khukuri being peened simply reinforces and adds to the durability of the knife without sacrificing the balance of the Khukuri.

Growing up in the dry and cold climate of Northern Alberta, Canada, I spent the early part of my life farming, logging, and hunting with my father. We often depended on a good knife to perform tasks in sometimes very harsh climates. Often getting us out of situations that had the potential to kill us both.  (Back then winters would commonly be around -50 to -60 degrees Celsius. Nowadays It’s rare to see it get colder than -30). That kind of cold is extremely hard on a knife, especially one that’s been sitting out and is then subjected to hard use.

Through this time, I’ve used many knifes such as the famous USMC Ka-Bar, both for Hunting and Field craft. With this experience I do have to say while other knives perform very well, none deliver the balance of power and utility that this Khukuri offers. For most I would end up having to carry a hatchet/axe and the knife. With this Khukuri I can perform both tasks with just the one blade. Truly amazing.

If I could I would love to get another couple of these for my wife and daughter to use the next time I take them out. This is truly a blade that one can trust their life on, and if taken care of I’m sure will last a lifetime if not more.

KHHI Nepal has done an amazing job, both in their excellent customer service as well as the craftsman that made the knife. This is something rarely seen in the knife & sword community.

Thank you very much, and Namaste.