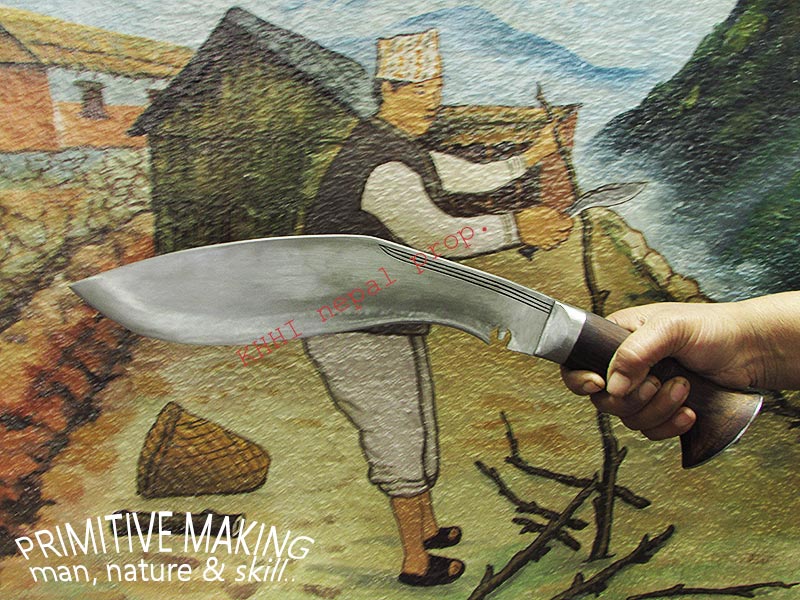 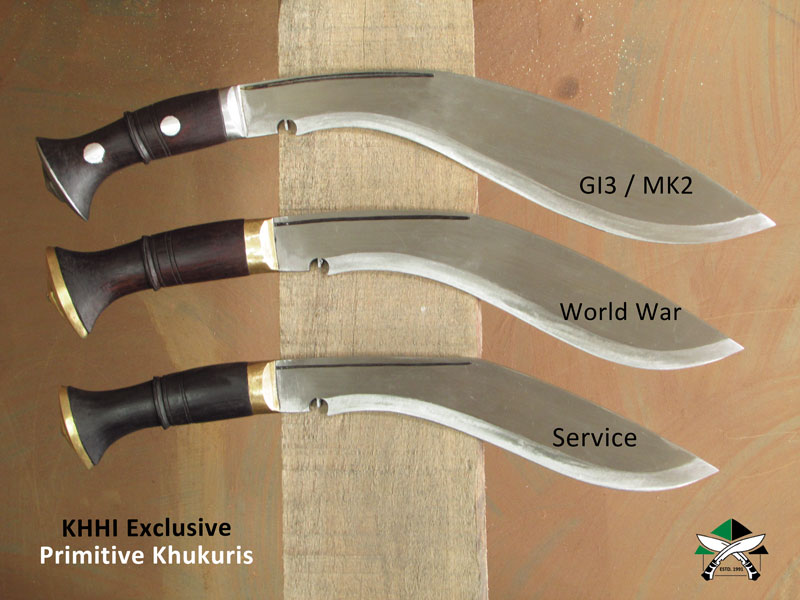 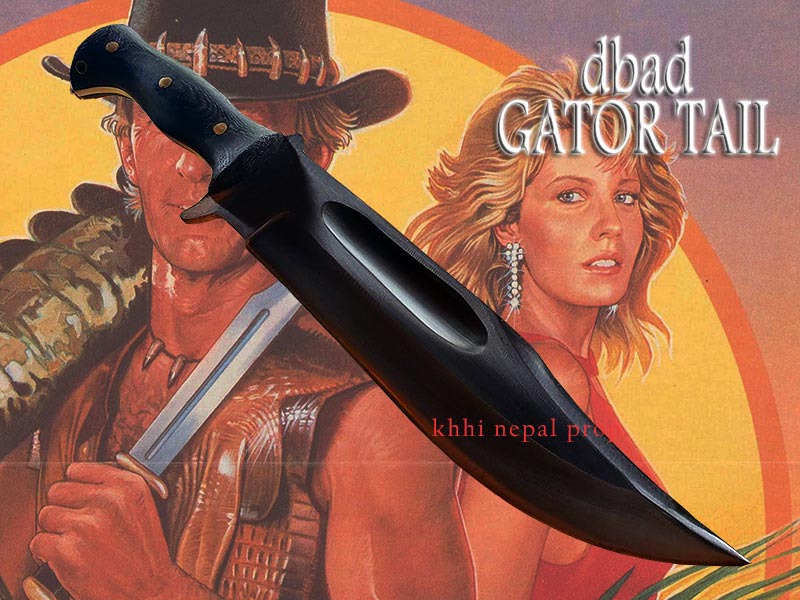 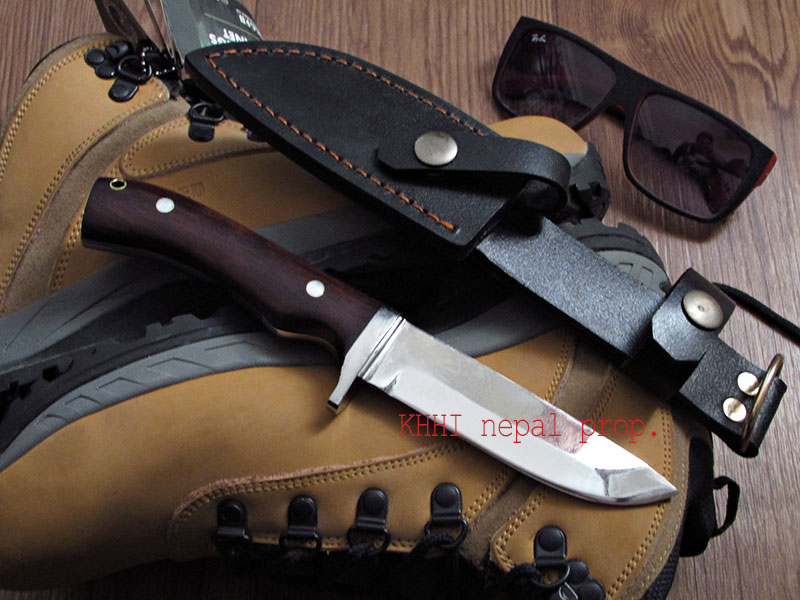 parts of a Kukri / Khukuri terms; know your knife better...

We have listed the common and popular khukuri terms used by Kamis (makers) and in Khukuri community for the general understanding and knowledge of a khukuri. These parts of kukri are technically used in the making process since generations. Here we have defined each and every Part of the blade, handle and scabbard/ sheath (DAP) of a Kukri for general information. The images displayed besides the term help to better understanding the various parts of the famous and historic Gurkha Khukuri. Each term is also well translated in modern English for universal understanding, facts and information. "Get in-depth knowledge of the Gurkha knife now!" 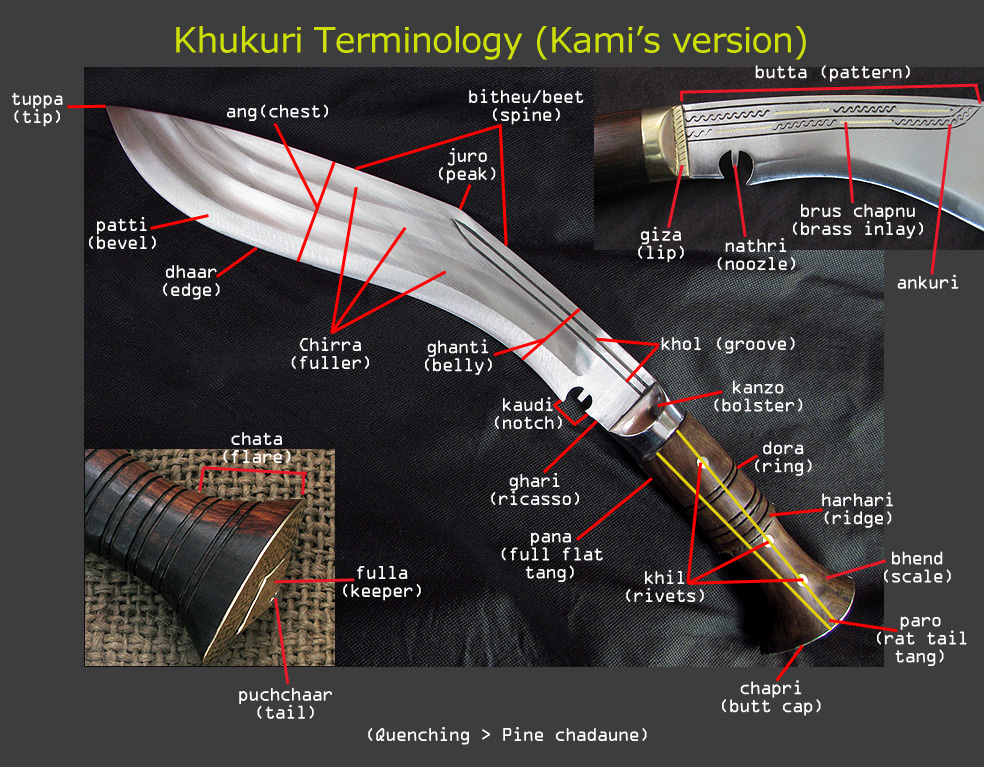 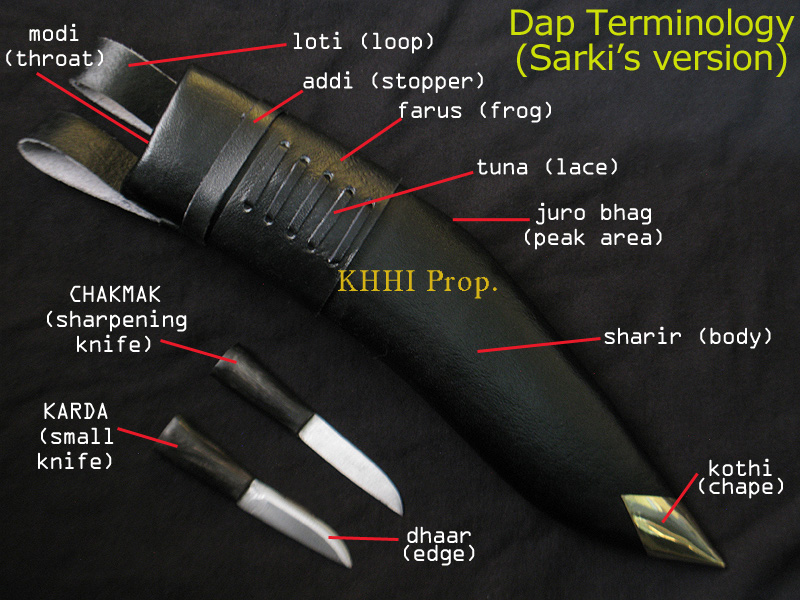 Additional terms you should know to better understand a Khukuri...

[The default finishing of each blade is well noted by the maker beforehand and he does the quenching or hardening of the edge accordingly. Meaning, the polished finishing generates heat more which withdraws hardness more hence the maker hardens more when quenching in order to tackle the problem, and so on..]

# Polished Version:
The Raw khukuri blade made by Kami is first stone grinded and sanded by 60 and then 100 grit sandblaster. After that it is scrubbed by coarse iron dust then medium and lastly fine, that is glued to 6-10” hard cloth wheel. Then buffing takes over which is done by using buff soap and a soft cloth wheel. For Mirror Polish Finishing, another special soap is used and press-buffing technique is adopted to get that mirror look. In the whole process good amount of heat is generated in the blade which naturally tempers it making the blade tough from brittle as it withdraws the hardness.

# Semi Polished Version:
The Raw khukuri blade made by Kami is first stone grinded and sanded by 60 and then 100 grit sandblaster. After that it is scrubbed by coarse iron dust that is prepared by gluing in a 6-10” hard cloth wheel and then Medium is used in the same manner. Later a 6-7” wheel that has very fine iron dust (almost as powder) glued in its edge is used in the blade to achieve the Semi-Polished finishing. In the whole process some heat is generated in the blade that withdraws the hardness turning it into tough from brittle; a natural tempering takes place here.

# Unpolished Version:
The Raw khukuri blade made by Kami is first stone grinded and sanded by 60 and then 100 grit sandblaster. After that it is scrubbed by coarse iron dust that is prepared by gluing in a 6-10” hard cloth wheel. The machining process stops here and Unpolished finishing is delivered. In the whole process minimum heat is generated which helps to temper the blade naturally. This makes the blade tough in return. 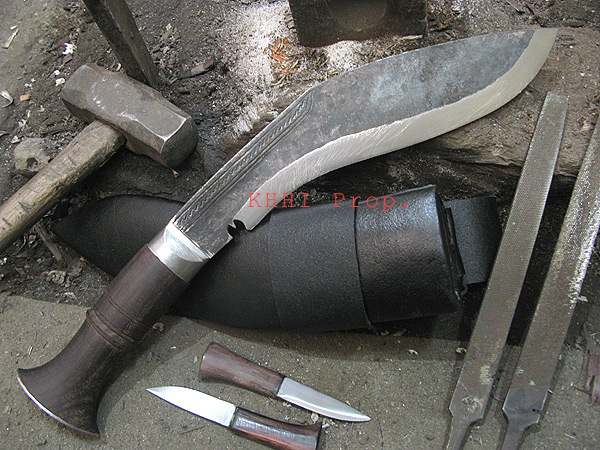 The Raw khukuri blade made by Kami is not even stone grinded or sanded (left as it is). Only a section or two (panel or/and edge) goes through machining (polished/semi-polished/unpolished) should that be the standard finishing (default) of the kukri knife. No heat is generated in this version. Here the maker manages the kukri’s edge and panel in such way that no machining is required at later stage. 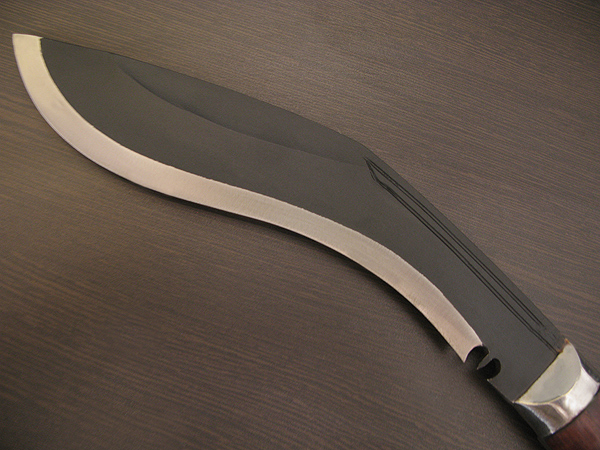 The Raw khukuri blade made by Kami is not even stone grinded or sanded (left as it is). The Raw part is then thoroughly coated by using primer and black chemical applied until necessary. Then the kukri is carefully heat treated (dried) in a special oven at 200-250* C for 2-3 hours and left to dry for 1-2 days. After that only a section or two (panel or/and edge) goes through machining (polished/semi-polished/unpolished) should that be the standard finishing (pre-set) of the kukri knife. Here in Black version, the maker manages the kukri’s edge and panel in such way that no machining is required at later stage. 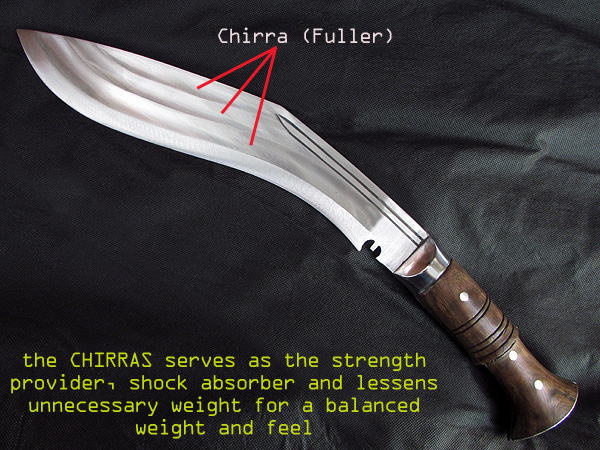 # Fuller / Groove (Chirra):
Curvature/s or hump/s that run along the surface/panel of the blade that is especially made for two specific objectives; to reduce the unnecessary weight of the blade and to withstand the direct impact generated from a strike against the edge of the blade. The curvature will evenly distribute the shock/force in a wavy motion towards the spine lessening the stress faced by the edge. The mass of the blade is evenly grinded off in a concave format to make the fuller/s. Fuller version is recommended for heavy stressful work. 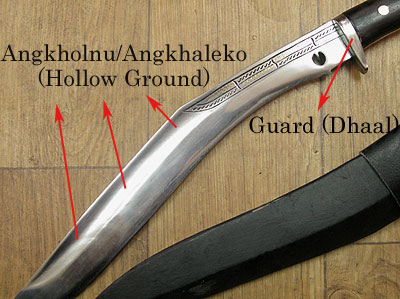 # Hollow Ground (Angkholnu/Angkhaleko):
Hollow Ground in khukuri term means to open out the panel.  “Ang” means “Panel” and “Kholnu” means to open out or grind out the material. Here the blade material is excessively grinded out and hollow created within the panel of blade. This not only reduces the unnecessary weight and provides a balance feel but also gives strength and stability by absorbing the shock felt by the blade on impact. 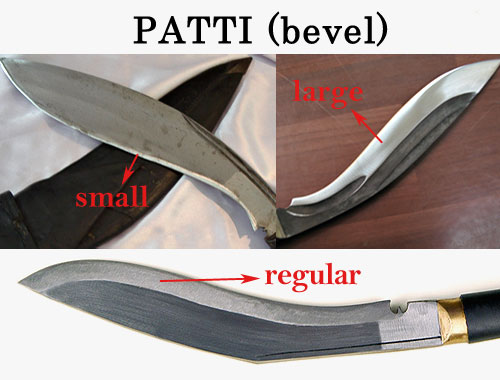 # Bevel (Patti):
There are normally three types of bevel in a kukri blade. REGULAR for normal cuttng , this is the regular and most common type of bevel used while making the khukuri , and mostly in the service kukris. The second is the LARGE; used for deep cutting I SMALL for strength and steep cutting 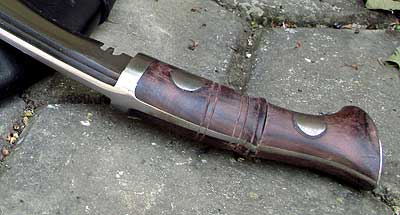 The tang of the blade is flat and goes all the way through the handle and is secured by rivets from both sides. The full flat tang is also visible on the sides of the handle. Two pieces of handle materials are fixed to the tang to complete the fixture. Bolster, butt cap, keeper, rivets, epoxy are used to strongly secure all the fittings. Full flat tang is easily identified by the rivets/dots seen in the handle. Highly recommended for heavy duty work. It also gives good counter balance to the blade. 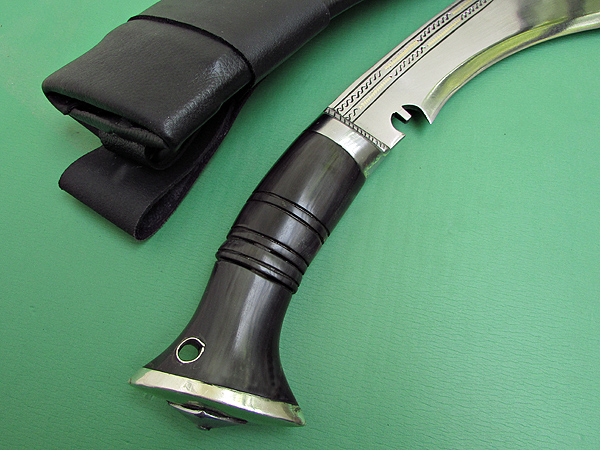 Most common type of tang where it is made flat and triangular shaped, having wider area close to the blade and narrower as it finishes towards the butt. The tang goes all the way through the handle and is secured tightly from the back by butt cap and keeper. Only the end or tail of the tang is visible from outside. A see thru hole is drilled in the handle to insert the tang all the way. Laha (traditional glue from bark of tree) or sometimes epoxy is used to jam the tang. Since the tang has an overall look of a rat’s tail it is called so. Recommended for regular and normal use. 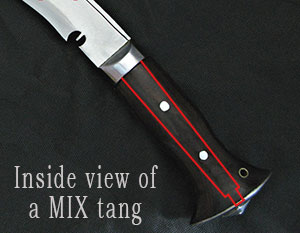 # MIX Tang (Fusion version):
It is an innovative type first done by KHHI nepal. Here the tang is hidden yet riveted from outside unlike the versions stated above. The objective here is to make a stronger and more comfortable ONE piece solid handle for the blade. The tang is much wider than "Rat Tail" to make enough space for rivets and it is inserted thru the handle material (not visible) and then riveted from outside. The maker has to be very skillful to do this job. It has no shrinkage issue too like with "Full Flat Tang". See photo. 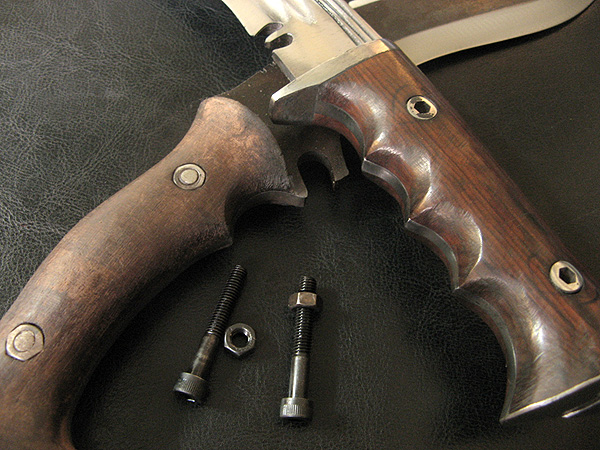 # L-Key Handle System:
A complete new type of handle fixture initiated by KHHI. Same as the above mentioned “Full Flat Tang (Panawal version)” but instead of regular rivets/pins L-Key knot bolt is used. The fixture will last a life time. Recommended for heavy duty work.

You can see some more addons terms related to Khukuri here

the Refer Offer; make some dollars thru us.. 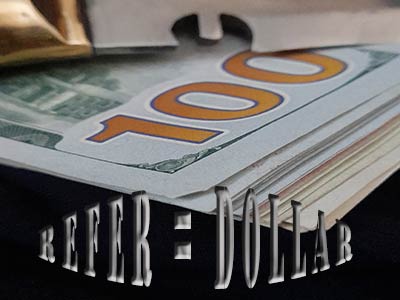